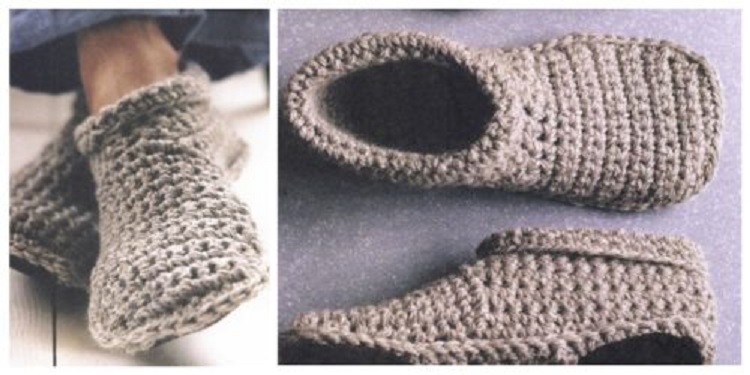 In wintertime or even in fall when the wind starts to get frosty and crisp, one of the pleasures is pulling on a crisp, clean pair of cozy knitted or crochet slippers from the closet or drawer. The great thing about slippers is you can wash them just like socks, and you can have several pairs, and you can make them yourself, and you can get them as gifts from friends, and you can… wait, was that just ONE great thing? Bottom line: people enjoy crocheted slippers.

Here we are again at that time of year when a t-shirt isn’t enough, and crocheters get a new opportunity to crochet nice gifts for their friends, as well as custom clothing for themselves. This pair of slippers is a free pattern from SMPCraft. One of their crafters Sarah Goldstein created this pattern as a crochet pattern. She found the pattern herself in one of her old books on her bookshelf on crocheting. The book was called “Simple Crocheting” and it has a bunch of patterns.

Here’s the free crochet pattern: It’s on the SMP website. We have a backup version saved as well, but why not get it from the crafting, crocheting lady herself?

This crafting pattern is rated level 9 for difficulty — that’s pretty difficult. But the project should also, according to the book, help crocheters learn to “decrease working a simple single crochet and increase designing to fit your shoe size.”

The slipper boot were modelled from sheepskin boots originally, and were originally made to be worn outdoors as well, and these crochet slipper boots, although they are obviously not rough out of doors wearing footwear, could be modified with simple leather soles in order to be somewhat outdoor — maybe patios and garden paths?

It seems she makes hers using a traditional wood shoemakers foot. Actually, some of the best bootmakers do this as well, rather than the no-foot-model shoes and boots available in most stores.

The size for these crochet slippers is a woman’s 9 and a half (24.5 centimeters), but she includes directions on how to adjust the size.

The pattern: Cozy Crocheted Slipper Boots (Free Pattern). SMP website here. Article printed here with permission of Blogunity, the original location of this blog. We are associated with Blogunity.